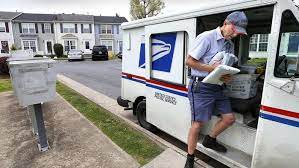 We previously noted that in an unspoken footnote to Biden's bombastic "no jab, no job" speech, various labor unions had quietly (and not so quietly) voiced their displeasure to the now official mandatory vaccinations including NYC teachers, California's largest public sector union and of course, the US Postal Service. And now we know that while Biden was eager to frame his new vaxx policy as all inclusive and with no exception, that was not really true.

According to the Washington Post citing a "White House official speaking on the condition of anonymity to discuss not-yet-public portions of the president's plan", U.S. Postal Service workers were not included in Biden's executive order requiring all federal employees to get vaccinated against the coronavirus.

While Biden framed his mandate as one covering all federal workers and all companies with more than 100 staff, he forgot to mention that any labor union that is instrumental in keeping the Democrats in power would be granted a very "unscientific" exemption. The loophole in question, according to the report, according to the White House source, is that the "USPS has a separate statutory scheme and is traditionally independent of federal personnel actions like this" even though postal workers would be strongly encouraged to comply with the mandate. Paradoxically, the WaPo also notes that this "explainer" is in conflict with reality: after all, the Postal Service is an independent agency of the executive branch, and it is required to be specifically included in executive orders that apply to working conditions for federal employees.