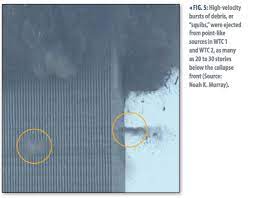 The destruction of the twin towers was accompanied by a series of explosions, and these buildings also fell into their own footprints at essentially free fall acceleration.  The US government's official coverup story has been totally demolished by authors such as David Ray Griffin, by scholarly conferences, university investigations, expert reports, and by Architects and Engineers for 9/11 truth.

Circumstantial evidence suggests that 9/11 was a scheme of George W. Bush regime neoconservative officials allied with vice president Dick Cheney and Israel to create a "new Pearl Harbor" that would generate support on the part of the American people and Washington's European allies for a Middle Eastern "war on terror" whose real purpose was to destroy Israel's enemies in the interest of Greater Israel.  Commentary Magazine editor Norman Podhoretz had called for such a war, and General Wesley Clark reported that he was informed of Pentagon war plans to that effect.