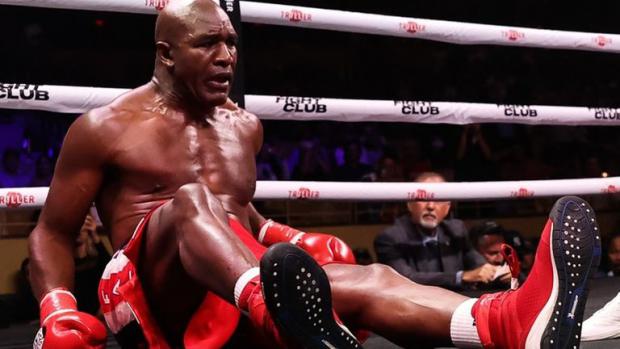 Evander Holyfield's comeback against Vitor Belfort has been branded a 'disgrace' and 'one of the saddest events in boxing' after the 58-year-old was brutally stopped in the first round.

Holyfield, who turns 59 next month, had stepped in as a late replacement for Oscar De La Hoya, 48, who pulled out of facing Belfort, 44, with coronavirus.

The former heavyweight champion had not fought since 2001 and had been refused to licence by the California State Athletic Commission, meaning the fight was moved to Hollywood, Florida.

But Holyfield's return was over before it really began. He slipped early on and nearly fell out of the ring before Belfort knocked him down with a left-hand jab.

Holyfield beat the count but the Brazilian continued to let the punches fly, forcing the referee to step in and end the fight with 10 seconds of the first round remaining.

Speaking after the fight about the decision to end the fight so early, Holyfield said: 'I thought it was a bad call. I don't think the referee should have stopped the fight that quick.'

Fans took to Twitter to hit out at how the fight had been allowed to take place.

One wrote: 'Evander Holyfield is 58 years old. That was a disgrace. Truthfully.'

'Whoever allowed Evander Holyfield to fight at 58 should be investigated and put in prison,' another wrote. 'An absolute disgrace.'

Vitor Belfort's pressure proved to be too much for Evander Holyfield.