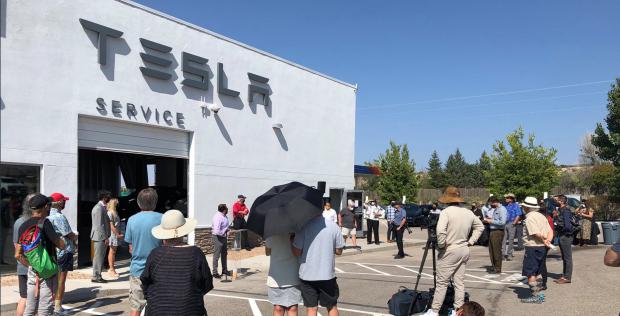 Elon Musk has dodged a ban on direct car sales in New Mexico by setting up a Tesla showroom on tribal land in the state.

The rules, which exist in a few other US states, are meant to protect dealers from their own automakers opening a company-owned store next to a third-party dealership.

Electric carmakers like Tesla have no history of deals with third-party franchises meaning the firm has not done official business in the state for years.

However, it has now been able to bypass those laws and open a sales and service center in a defunct casino on Nambe Pueblo land where customers can buy the cars direct from the manufacturer.

In 2019, Tesla tried to push a new law in the state with the help of some favorable legislators, but local car dealer associations used their political influence to shut it down, according to Electrek.

'This location will not only create permanent jobs, it is also part of a longterm relationship with Tesla,' said Nambe Pueblo Gov. Phillip Perez.

The building is currently a defunct casino on tribal land just north of Sante Fe.

State law doesn't apply on that land, making it legal for Tesla to start building.

The facility opened Thursday with tribal leaders and state lawmakers in attendance.

They all saw it as a huge opportunity for the region.

'This location will not only create permanent jobs, it is also part of a longterm relationship with Tesla,' said Nambe Pueblo Gov. Phillip Perez.