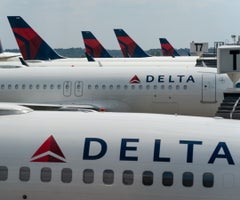 A 'huge number' of Delta employees rushed out to get vaccinated after the company's decision to enforce $200 on workers who refused the shot.

The new policy will take effect November 1, and staffers using the airline's health insurance will face a $200 premium each month if unvaccinated at that point, CEO Ed Bastian announced late last August in a memo sent across the company.

'The average hospital stay for COVID-19 has cost Delta $50,000 per person. This surcharge will be necessary to address the financial risk the decision to not vaccinate is creating for our company,' the memo reasoned.

Following the declaration, nearly 4,000 Delta employees out of an approximate 20,000 who had yet to get vaccinated have since been spurred to get the jab, the company's Chief Health Officer, Dr. Henry Ting, said Thursday, during a media briefing presided over by the Infectious Diseases Society of America.

'Just within the two weeks of the announcement, we've seen nearly 20 percent - or one-fifth - of that 20,000 decide to get the vaccine,' Ting said.

Ting remarked that the sudden uptick reflected a 'huge number' of staff that were influenced to get the jab - especially taking into account the hesitancy of those 20,000 initial holdouts - even though it's only about a 4 percent jump.

Before Bastian's declaration, approximately 74 percent of Delta's workforce had received the vaccine. Now, that number has increased to 78 percent.

'That last 4 percent is very different from the first 4 percent,' Ting attested, referencing unvaccinated staff's initial reluctance to get the shot.