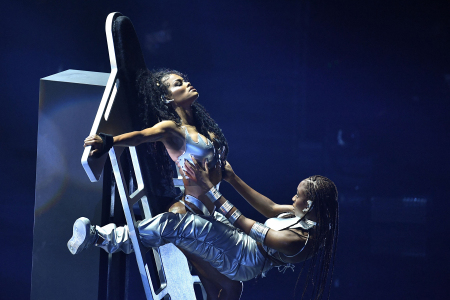 The founder of Barstool Sports criticized pop singer Normani's performance at the MTV Video Music Awards Sunday night, protesting what he sees as a double standard between his 'raunchy' website and the suggestive dancing on national TV.

'This is good. Barstool bad,' he told his 2.6 million followers above a video of himself talking over the awards show.

'I just want people to know, this is on VH1 right now, just like cable TV, anyone can watch this.

'People say Barstool's too raunchy, like, that, you know, we're sexist, chauvinist pigs, can't let people see it, too over the top, smokeshows, but this girl, who's getting like face f***** and scissoring, right now just on VH1, this is cool.'

Normani, 25, was promoting her latest single Wild Side.

Portnoy founded Barstool in 2003 as a newspaper for men who 'love sports, gambling, golfing and chasing short skirts,' according to the website.

It's evolved as an outlet that hosts a number of bloggers and compiles viral videos on multiple popular Instagram accounts - but it's held strongly to its roots thanks to Portnoy's leadership, with a faithful, and sometimes harsh, young male audience and daily posts of women crowned the 'Smokeshow of the Day.'