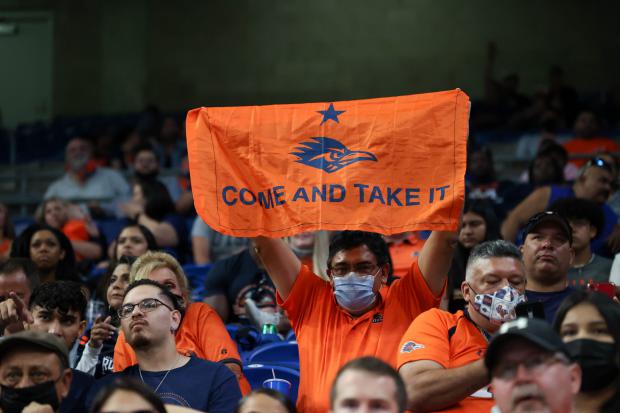 A nearly 200-year-old battle cry adopted by students at a San Antonio university has become the latest victim of 'woke cancel culture' after a professor said it perpetuated racist stereotypes against Mexicans and was used by pro-gun activists.

The University of Texas at San Antonio has banned the 'Come and Take It' chant from its college football games and other athletic events after a petition denouncing it  garnered hundreds of signatures.

On social media, critics accused the university president of making a 'spineless decision' to ban the phrase.

The school's president, Taylor Eighmy, sent an email to all students, faculty, and staff on Tuesday announcing that the school would no longer allow the phrase to be featured as a rallying cry on flags and banners.

At UTSA football games in San Antonio, a large 'Come and Take It' flag is traditionally unfurled in the student section at the start of the fourth quarter at around the same time that a cannon is fired.

The ban was announced last week, but photos from inside the Alamodome taken during Saturday's 54-0 victory by UTSA over Lamar show fans waving the banner with the slogan emblazoned on it.

The phrase 'Come and Take It' was made popular beginning in 1835, when Texan colonists refused to give back a cannon that was left to them by the Mexican military in order to fend off attacks by Native Americans.