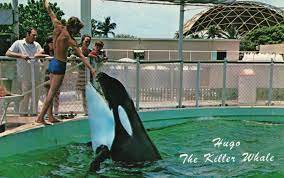 HUGO the killer whale was said to have been so unhappy in his captivity at an aquarium that he slammed his head into the wall of his tank until he died.

The orca suffered a brain aneurysm after repeatedly ramming against the edge of his enclosure in a case often cited by animal rights activists as proof whales should not be kept at sea parks.

The Sun Online looks at Hugo's story after another killer whale - named Kiska - was filmed smashing her head against the side of her tank in a chilling echo of the tragic orca.

Hugo was the tank mate of another famous orca, Lolita, at the Miami Seaquarium in Florida, who 50 years since being captured is still subject to long running legal battles as activists rally for her release.

Lolita is the second oldest whale in captivity, and has spent of her years alone since Hugo died on March 4, 1980.

The Dolphin Project - an animal welfare organisation - says Hugo was born in the wild but then rounded up by hunters when he was around three-years-old while swimming in Vaughan Bay off the coast of Washington.