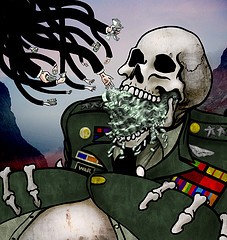 It notes that since the start of the intervention in Afghanistan in October 2001, Pentagon spending has totalled $14 trillion, with the US war budget increasing between 2002 and 2003 by more than the entire military spending of any other country. Between one-third and one-half of that total was pocketed by defense firms, which provided logistics and reconstruction, private security services and weapons – along the way, these contractors habitually engaged in "questionable or corrupt business practices," including fraud, abuse, price-gouging and profiteering.

Lockheed Martin, Boeing, General Dynamics, Raytheon, and Northrop Grumman have in recent years been awarded between a quarter to a third of all Pentagon contracts. It's surely no coincidence that four of the past five US Defense Secretaries previously worked at one of the 'big five'.

The State and the Problem of Evil