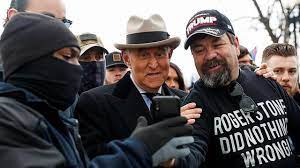 Stone was in the midst of an interview Wednesday with 'Real Talk' on KRTK in the St. Louis suburbs, a conservative outlet that calls itself the 'Voice of Freedom.'

Stone was answering a question about why he thinks it is 'imperative' that Trump, who pardoned him after he was convicted of lying to Congress, should run for president in 2024.

'Hold on a second, I have a process server at my front door about to serve me in the latest lawsuit,' Stone said, as the scene plays out on air.

'Live on your radio show,' he said, prompting his interviewer to exclaim: 'Holy smokes.'

Stone goes on to have a polite conversation with the process server who tracked him down.

'Yes of course, I'll be happy to accept,' Stone says. 'Yes of course, a civil court in the District of Columbia,' he says, before the server corrects him and says 'federal.'

'Alright, I have just been served in the January 6th lawsuit, live right here on your radio' Stone says. He then riffs that it is a 'big, big stack of papers, which is good because we're out of toilet paper today.'