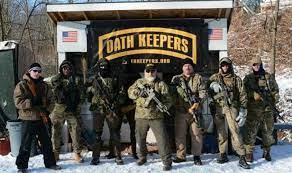 To some, Stewart Rhodes is a paramilitary commander enlisting thousands of foot soldiers to overthrow the government.

To others, he's a couch-surfing grifter — and the most shocking thing about the involvement of his Oath Keepers group in the Jan. 6 assault on the Capitol was that some members actually showed up.

To federal prosecutors, Rhodes, 56, is "Person One," which is how he is referenced in court filings for roughly 22 Oath Keepers associates charged in connection with the Capitol attack, including 18 who are accused of conspiracy in the largest single indictment of the probe. Five have pleaded guilty.

In the prosecution's timeline, Rhodes coordinated with participants, allegedly giving advice about what weapons to bring and speaking with one who was part of the "stack" formation implemented moments before the group charged into the Capitol — one of the most salient images of the day.

The Second American War of Independence Has Begun

The 'Plandemic' and the Great Awakening