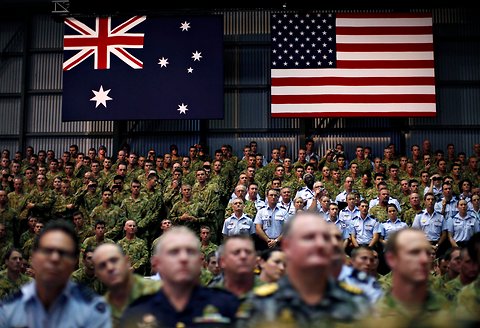 A day after the US, UK, and Australia announced a new military pact to counter China, Australia's defense minister said more US military aircraft and troops will deploy to the country.

Australian Defence Minister Peter Dutton said Canberra made the comments in Washington after a meeting with Secretary of Defense Lloyd Austin. Dutton said the US and Australia agreed to enhance "our force posture cooperation."

"This will include greater air cooperation through rotational deployments of all types of US military aircraft to Australia," he said.

When asked about more US troops deploying to Australia, Dutton said, "So I do have an aspiration to make sure that we can increase the numbers of troops through the rotations. "

He also hinted that Australia might host US medium-range missiles that were previously banned under the Intermediate-Range Nuclear Forces Treaty, which the Trump administration withdrew from in 2019. Dutton signaled Australia is open to basing "different ordinances," which he said was in "Australia's best interest."

With the Pentagon focused on China, Australia will play a significant role in Washington's strategy in the Pacific. The nuclear-powered submarines Canberra gains from this new pact will give Australia more abilities to patrol sensitive areas like the South China Sea.