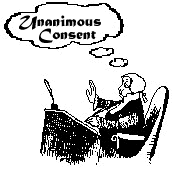 The Covenant of Unanimous Consent does not receive nearly the amount of publicity that it deserves. The USA Imperial Empire is in the late stages of fascism (crony-corporatism). The Covenant can play an important role among those who plan now to survive and rebuild after the collapse of the dollar, the military empire and the breakup of the United States.

What I want to accomplish artistically amounts to nothing more than fulfilling the promise of the American Revolution."— L. Neil Smith

I consider The Covenant of Unanimous Consent to be L. Neil Smith's most important work, ever.

As a Memorial, I would like to review what he wrote in 1985 and amended by unanimous consent 35 years ago, in 1986, and what I have described elsewhere as "the fulfillment of the promise of Jefferson's Declaration" [1].

L. Neil Smith's Covenant of Unanimous Consent actually FULFILLS the promise of individual freedom in Thomas Jefferson's Declaration of Independence. The Covenant is simple, rational, personal, easy to understand and even short enough to memorize. It easily fits on one side of a single piece of paper—and is currently available in English, Spanish, French and German![5]