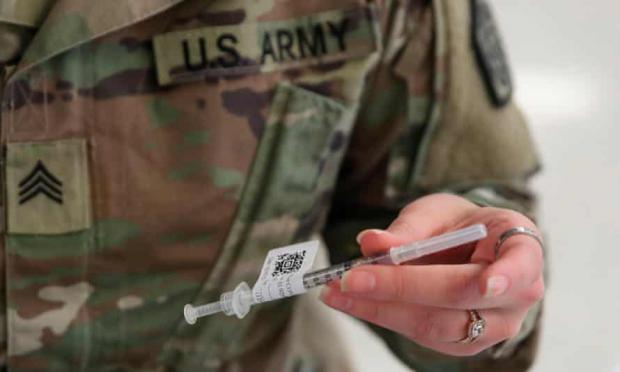 Fox News anchor Tucker Carlson waded into the controversy over the US military's COVID-19 vaccine mandate on Monday, slamming it as a ruse to identify 'sincere Christians,' 'free thinkers' and 'men with high testosterone levels' in the armed forces.

During the diatribe, Carlson, 52, condemned the requirement as 'dishonest' and a 'political purity test' - and accused military officials of 'brainwashing' soldiers hesitant to the get the jab.

'To this day, only 46 members of the entire US Military died from the coronavirus over the last year-and-a-half,' Carlson said at the start of his piece.

'Suicides, by contrast, kill many, many times more. In just a few months last year, 156 service members killed themselves. So military suicide is an actual crisis the Pentagon might want to address.'

Carlson then asserted: 'The point of mandatory vaccination is to identify the sincere Christians in the ranks, the freethinkers, the men with high testosterone levels, and anyone else who doesn't love Joe Biden, and make them leave immediately.'

'It's horrifying,' Carlson added of the military mandate. 'If you loved the country, you would not do this.'

Carlson then attempted to bolster his claim with the help of some visual aids - two PowerPoint slides that he says were used by the US Army to brainwash 'freethinkers.'

According to Carlson, the slides address concerns service members may have had pertaining to getting the jab against their will.