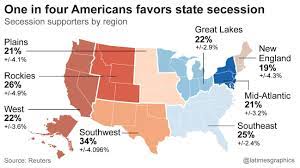 Llewellyn urged readers to consider both law and custom when seeking to understand a society, to recognize the difference between the black letter legal codes and the day to day practices of state officials and citizens. Where there was no sanction, the author instructed, there was no law. In other words, we should focus on the substance of things at least as much as we focus on the form. This is an important lesson for how we view the United States today, with an eye toward what is actually happening on the ground among people and institutions, rather than legal formalisms.

A few years ago, on a panel discussion at an event in Vienna, Dr. Hans-Hermann Hoppe made an offhand remark I found very interesting. Paraphrasing him, he said that nationalist movements in the nineteenth and twentieth centuries were largely centralizing while the nationalist movements of the twenty-first century were largely decentralist in character—breakaway movements represented by Brexit, Taiwan, Scotland, Catalonia, and others. Donald Trump also represented a breakaway movement of sorts, away from DC, but of course this possibility went totally unfulfilled.