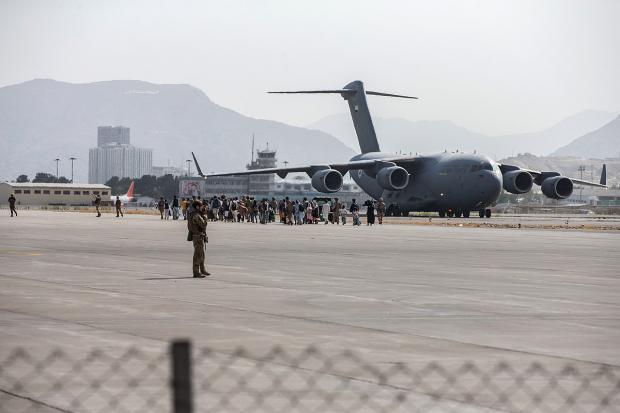 I couldn't tell for certain if it was alive or dead at that arms-length distance, but whether or not I would like to admit it, I think I know the truth. I know nothing about her, or her family; where they came from, where they ended up, or the fate of the child in her arms, but as I think back on my long two weeks in Kabul I think that vision is emblematic of the situation that was bared to the world in August.

In some ways, she was exceedingly lucky; she and her family had gotten documentation from someone allowing them to escape a hostile Afghanistan and seek refuge and a new life in the United States. She and her family had made the journey from wherever they were, it could have been a mile or it could have been hundreds of kilometers, and had waded through the desperate mass of humanity outside the gates to "safety" inside the walls of HKIA. Yet they were faced with the inescapable reality of loss and tragedy and horror, both in the long train of events leading up to that moment and in the loss of their child.

American soldiers and Marines were presented with an extraordinary situation in HKIA, an entirely unprecedented situation in my untrained historical opinion, of being essentially captives at the mercy of our captors. The speed and the totality of the Taliban's victorious campaign to retake Afghanistan caught the world completely off-guard, and I would hazard to guess they surprised even themselves.

Pundits the world over acknowledged the inherent weakness of the U.S.-backed Afghan government, and there was a great deal of high-quality journalism detailing the corruption and the impotence of the Afghan armed forces. Just how much of a paper tiger it was was made abundantly clear as the Taliban effortlessly de-fanged and de-clawed them in province after province that the U.S. had withdrawn from, until only Kabul itself remained.

Businesses Face $700,000 Fine For Not Forcing Shots On Employees