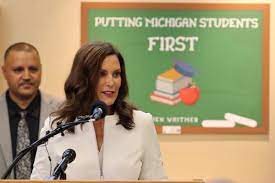 Her husband was caught boating when she had forbidden ordinary Michiganders to do the same, and she was caught traveling to Florida, violating her own proclamations.

Resentment has grown, and not even an FBI informant–led bogus kidnapping plot has been enough to keep her polls strong as she faces re-election in November 2022.  Mary Chastain of Legal Insurrection spotted Whitmer signing legislation that specifically banned the state from enforcing mask mandates and vaccine passports:

Whitmer and the Michigan state legislature agreed on a budget. This is no ordinary budget because it bans mask mandates and vaccine passports:

Democratic Michigan Gov. Gretchen Whitmer and the state legislature have agreed on a budget proposal that includes language banning health officials from enforcing mask mandates in schools and preventing state public agencies from enforcing vaccines on employees or customers.

"The director or local health officer shall not issue or enforce any orders or other directives that require an individual in this state who is under the age of 18 to wear a face mask or face covering," the 1,000-page budget states in one section.