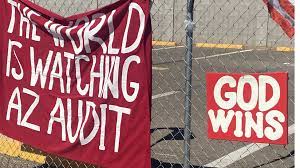 Bigger and possibly quite a lot worse than this — was that the Election Management Database and files were deleted, subpoenaed equipment was withheld and some logs were not preserved. The chain of custody was broken and machines that weren't meant to be connected to the internet, were connected. It's not that the US doesn't have free and fair elections, which it doesn't, but that it's not even trying.

No team that won 80 million real votes, and cared about public confidence would have made it so hard to audit, delayed for so long, and destroyed so much data.

The Democrat fog machine is shouting that the vote count shows Biden won "and by even more votes". They appear to be hoping that if they say it loud enough and often enough people won't notice the Biden won a crooked election.

The only thing we know for sure is that we'll never know who the people of Arizona voted for.

The bottom line: The number of ballots impacted by discrepancies far exceeds Biden's margin of victory in the state. Both sides of this debate will claim the report validates their position, but in truth, without proper vetting of the impacted ballots, we'll never know if the election results were legitimate.