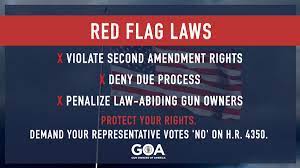 How did they do it?

With the help of 135 Republicans joining with the Democrats to pass something so clearly unconstitutional.

It looks like they're trying to do the confiscations through the military.

A provision in the 2022 National Defense Authorization Act would allow military courts to issue protective orders that include "Red Flag" gun confiscation, according to the more than 1,300-page bill.

In the legislation, those beholden to the United States Code of Military Justice could be issued a "military court protective order" by a military judge or magistrate, which would make "possessing, receiving, or otherwise accessing a firearm" illegal.

To Keep and Bear Arms: Sometimes a Duty, Ever a Right