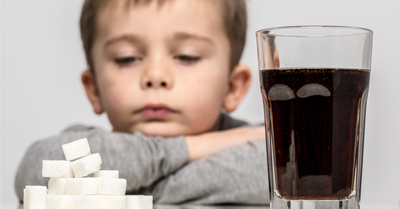 By: Cat Ebeling
Co-author of the best-sellers:  The Fat Burning Kitchen, The Top 101 Foods that Fight Aging & The Diabetes Fix

Did you know that Coca-Cola products are consumed at the rate of more than 1.9 billion drinks per day? The iconic American brand is recognized instantly around the globe and sold in more than 200 countries. And that doesn't count other soft drinks, like gigantic Pepsico products and other smaller ones.

While the word is starting to spread about soft drinks and their health issues, soft drinks like Coke, Pepsi, and other sodas have retained millions of people who are quite literally addicted to them.

A recent Gallup poll reveals that about 50% of surveyed Americans still drink soda on a daily basis. What's more, among those who drank soda, the average daily intake was 2.6 glasses per day. Around the world, Mexicans drink more soft drinks than any other country in the world at roughly 163 liters or 36 gallons per person, per year. Type 2 diabetes directly kills over 70,000 Mexicans a year, and the number is probably much higher, since many people are not diagnosed, or may die of heart disease, strokes or cancer—all diseases that can stem from diabetes and soft drink consumption. In the U.S. soft drink consumption is directly tied to the steep increase in newly diagnosed diabetes patients as well. (Note:  Our blog here shows how the Paleo Diet can prevent or even reverse type 2 Diabetes)

Unlike Mexico and other foreign countries, in the United States, soft drinks are mostly sweetened with high fructose corn syrup, an especially vile type of sweetener, even more dangerous than regular sucrose, which is commonly the sweetener used for sodas in other countries. Any large amount of sugar is extremely hazardous to the body, but high fructose corn syrup is even worse than regular sucrose. It is especially taxing on the liver and blood sugar levels. Regardless of the type of sugar soft drinks are sweetened with, these things happen within minutes of drinking a sugary soft drink: 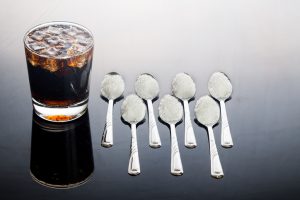 - In the first few minutes, 10-12 teaspoons of sugar hit your system very quickly since it is in liquid form. The only reason you don't vomit right away from that massive dose of sugar, is because of the phosphoric acid, carbonation, and other flavors that mute its super sugary taste.

- In about 15-20 minutes, your blood sugar spikes to astounding levels, causing an insulin reaction. This means that your liver quickly responds by trying to save you from all that sugar in your bloodstream by turning it into fat cells, especially when that sugar is in the form of high fructose corn syrup. Obviously, your body then tries to store all that fat, and it circulates in the blood stream. (Ever been told you have high triglycerides? This is fat being carried around in the bloodstream, and is often the result of a diet too high in sugar, and refined carbohydrates.) All that fat gets stored on the body, or in the liver, becoming one of the primary causes of Non-Alcoholic Fatty Liver Disease. And of course, it is also a primary causative factor in obesity, heart disease, diabetes, and even many cancers.

- In a half hour or so, your body starts absorbing all the caffeine in the soda. Your pupils dilate, your heart rate increases, you feel temporarily energized as your blood pressure rises, and your liver, in response to the caffeine, dumps even more sugar into the bloodstream. Result, insulin goes back up, you get hungry and that sugar gets stored as more fat.

- In 45 minutes, dopamine (one of your 'feel-good' hormones) is released, stimulating the pleasure center of the brain, very much in the same way as heroin—and equally as addictive too, by the way.

- In 60+ minutes after downing that soda, the phosphoric acid in the soda binds onto usable calcium, magnesium and zinc in your digestive system. By now, the diuretic effect of the caffeine and liquid goes into effect, making you have to urinate. This means your body cannot put those highly valued minerals to use, as they attach to the phosphoric acid and get dumped from the body in the form of urine. And guess what, if you drank that Coke to quench your thirst, you will end up peeing more than that away, making you even thirstier and more dehydrated than you were in the first place.

- An hour after that soda, the caffeine and sugar wear off, and you start crashing. The massive sugar and insulin spike leave you hungrier, tired, irritable, and sluggish. Not only that, you will probably be thirsty again, and given the addicting properties of soda, you may be craving another.

Wife Stands Off With Hospital To Keep Her Husband Alive, And Wins

Getting Professional Medical Care After an Economic or Societal Collapse