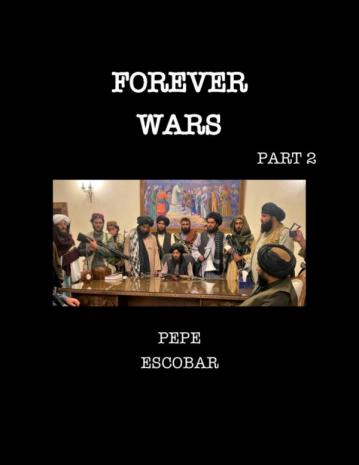 Forever Wars: Afghanistan-Iraq, part 2, ranging from 2004 to 2021, is the fourth in a series of e-books recovering the Pepe Escobar archives on Asia Times.

The archives track a period of 20 years – starting with the columns and stories published under The Roving Eye sign in the previous Asia Times Online from 2001 all the way to early 2015.

The first e-book, Shadow Play, tracked the interplay between China, Russia and the U.S. between 2017-2020.

The second, Persian Miniatures, tracked the Islamic Republic of Iran throughout the "axis of evil" era, the Ahmadinejad years, the nuclear deal, and "maximum pressure" imposed by the Trump administration.

Forever Wars, part 1 starts one month before 9/11 in the heart of Afghanistan, and goes all the way to 2004.

Part 2, edited by my Asia Times colleague Bradley Martin, starts with the Abu Ghraib scandal and the Taliban adventures in Texas and goes all the way to the "Saigon moment" and the return of the Islamic Emirate of Afghanistan.

The unifying idea behind this e-book series is quite a challenge: to recover the excitement of what is written as "the first draft of History".

You may read the whole two-volume compilation chronologically, as a thriller, following in detail all the plot twists and cliffhangers.

Or you may read it in a self-service way, picking a date or a particular theme.

On part 1, you will find the last interview by commander Massoud in the Panjshir before he was killed two days before 9/11; the expansion of jihad as a "thermonuclear bomb"; life in "liberated" Kabul; life in Iraq in the last year under Saddam Hussein; on the trail of al-Qaeda in the Afghan badlands; who brought us the war on Iraq.