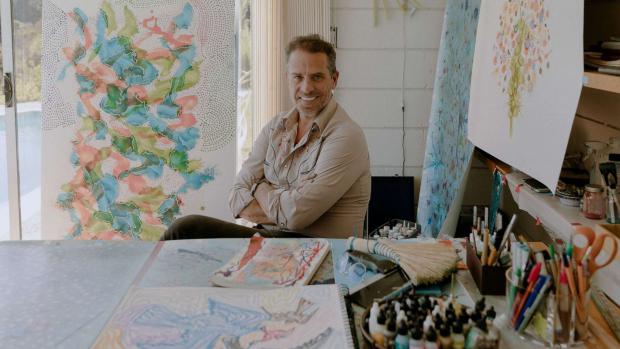 Video and photos exclusively obtained by DailyMail.com show Hunter and his gallery manager Georges Bergès entertaining around 200 people at the famous Milk studios in Hollywood on Friday, including his wife Melissa and two of his daughters, 27-year-old Naomi Biden and Maisy Biden, 20.

Around 200 invites for the tightly-policed event went to a host of Los Angeles glitterati and potential buyers of Hunter's art, the prices for which range between $75,000 and $500,000.

The eye-watering sums, unheard of for a debuting artist, have prompted serious concerns by former White House ethics chiefs, who fear that money for the works could be used as proxy political donations or to curry favor with President Joe Biden and his family.

The 'pop-up' event was held in one of the large white rooms at the Milk Studios, commonly used for high-end photo and film shoots, between 6:30pm and 9pm on Friday night.

A-listers recently shot at the studios include Beyoncé and Ariana Grande, and Jay Z has been pictured at the studio's events.

Although Hunter's first exhibition of his art work had been billed for September for months, the location for the exclusive viewing for potential patrons has been a closely-held secret.

But a clue emerged on Instagram when his oldest daughter posted a photo of herself yesterday in a white pleated coat, black heeled boots and handbag walking in front of a photographer's white background set at Milk Studios, and others shared a picture of her at the event with her younger sister.