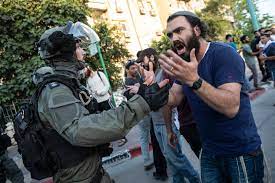 Basil al-Adraa, a Palestinian journalist and human rights defender, documented the violence in the South Hebron Hills of the occupied West Bank on 28 September. The incident "received wide media coverage," according to B'Tselem, an Israeli human rights group.

Al-Adraa's report on the settler rampage, co-authored with Yuval Abraham, was published on the Israeli website +972 Magazine under the title "Scenes from a Jewish pogrom" (the attack occurred on the final day of the Jewish holiday of Simhat Torah).

In the report, Palestinian residents described the terrifying assault on their community that left a toddler with a fractured skull after a settler threw a stone at his head.

The attack began when settlers assaulted a shepherd and slit the throats of three of his sheep in Mufaqara village.

"Soon after, several dozen more masked settlers arrived armed with handguns, stones, clubs and sticks," according to the report in +972.

The Kyle Rittenhouse Case - 7 Things You Should Know!