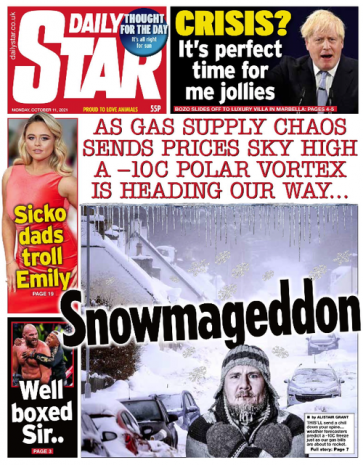 A sensation headline from UK's tabloid newspaper, Daily Star, sums up a possible rare weather event that could throw the UK into a more profound energy crisis. The headline states: "As gas supply chaos sends price sky-high a -10c polar vortex is heading our way..."

Meteorologists warn a stratospheric warming event could generate a polar vortex split that pours freezing weather into the country later this month or early November.

"There are signs of the stratosphere experiencing an unusual warming in the next few days, causing the polar vortex above the Arctic Circle to become less strong than normal later in October," a former BBC weatherman and meteorologist for Weathertrending John Hammond told The Sun.

"These high-altitude winds normally intensify as we head towards winter. So an unusual weakening of the polar vortex may well impact our weather later through autumn and into early winter.

"'Sudden stratospheric warming' events can sometimes lead the polar vortex to go into reverse, which can have dramatic impacts on winter weather and increase the chances of severe cold.

"However, there are no indications yet that such a reversal will occur.