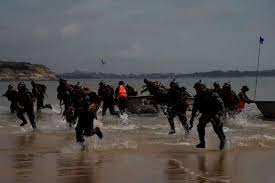 , though it did not link the exercises to current tensions with Taipei.

Taiwan has complained of stepped-up military and political pressure from Beijing to force it to accept Chinese rule, including massed

The official People's Liberation Army Daily newspaper, in a brief report on its Weibo microblogging account, said the drills had been carried out "in recent days" in the southern part of Fujian province.

The action had involved "shock" troops, sappers and boat specialists, the Chinese military newspaper added. The troops were "divided into multiple waves to grab the beach and perform combat tasks at different stages", it added, without providing further details.

China Halts Some US Flights As Omicron Wave Spreads