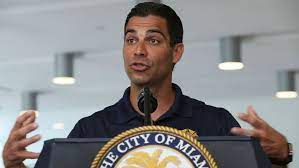 During an interview on Bloomberg Technology on Tuesday, Suarez said the city will request a proposal this month to allow employees to get paid in bitcoin, and even allow residents to pay fees and even taxes in bitcoin if the county allows.

Suarez said it was a "major priority" for him as he wants to differentiate the city as a "crypto capital of the United States or of the world."

Suarez further said he wants the city to be able to hold bitcoin on its balance sheet, which is not currently allowed in the state of Florida.

"If we would've been able to hold it from the moment that I put the resolution on the agenda, it'd be up by 30 or 40 percent, so I would have looked like a genius back then," Suarez said.

The Miami City Commission adopted a resolution in February that directs the city manager to conduct feasibility studies on allowing the city to let employees choose to receive some or all of their compensation through bitcoin, and to allow residents and business to pay for fees and services in bitcoin.