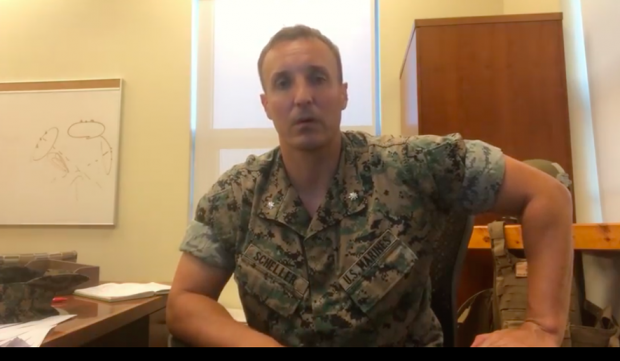 The mother of Marine Lt Col Stuart Scheller on Friday night thanked the judge for his leniency in his case, praising him for taking her son's criticism of the Afghanistan withdrawal in context.

Scheller, 40, was ordered to receive a letter of reprimand and to forfeit $5,000 in pay over his blistering online attacks on generals he blamed for the deadly and chaotic departure.

Scheller stood rigidly in his uniform and showed no emotion as Judge Colonel Glen Hines read out his decision – after praising the 17-year veteran's previously 'outstanding' service record.

Scheller's parents Stuart Sr and Cathy sat quietly in the first row of seating behind their son as he was sentenced.

'I would like to thank Judge Hines for carefully examining all of the evidence,' she said.

'Not taking it out of context, listening to our son's complete and total statement.

'Checking out his military record, recognizing that there was not a single blemish on it until the fatal day of the botched withdrawal from Afghanistan and the 13 service members killed.

'He recognized it for what it was.

'He gave the lenient sentence and we just cannot thank you, America, enough.'

The judge at Camp Lejeune, North Carolina, said he had watched all the four videos overnight that were posted by Scheller and 'saw a man who appeared to be in pain, frustrated and confused'.

He said he also spent the evening reviewing Scheller's service record – which was 'outstanding before this one month of conduct'.

Judge Hines added: 'I don't think I've seen an officer consistently in, as we say, the top three blocks of the Christmas tree. He was on a consistent upward path.'