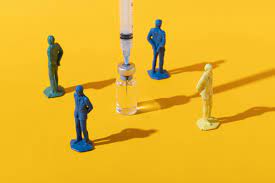 To watch a video covering this idea, click here: "Behold: A Favor for Federal Employees"

Hang on. Help is on the way. There is a hope, a bank-shot, and an opportunity for a bit of elbow grease from some of you.

If all goes according to hope, next week a federal class action lawsuit will be filed against the boss of a federal organization (not the DOD). The plaintiffs will be employees of that federal organization. They will be seeking Temporary Restraining Orders and permanent injunctive relief.

Here is the bankshot: I want to get it multiplied so the Secretary or Chair or Director of every federal organization is finding himself or herself or xirself staring down the barrel of a federal class action suit along with accusations of Nuremberg Code violations.

How do I expect to get it so multiplied? Through the magic of a global grassroots movement known as "Tore Says".

Many federales likely know who Tore Maras is, but for the newcomers: she runs a podcast that has become a global top 40 political broadcast. In five broadcasts of three hours each per week, Tore discusses events from a perspective that the mainstream would dismiss as "conspiracy minded" (setting aside an ability to predict the future, as she demonstrates by taking clips from shows three years previously and playing them now).