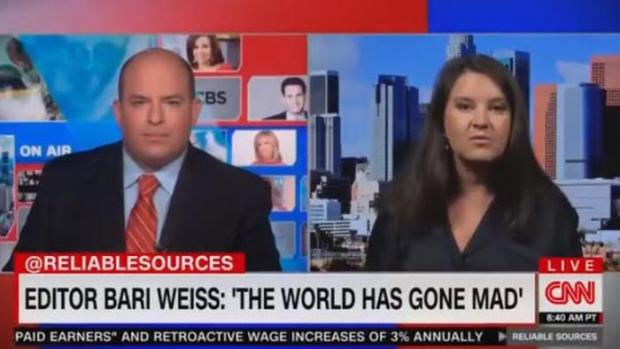 Less than a week after CNN scrambled to do damage control when their chief medical correspondent was wrecked by Joe Rogan over Ivermectin lies, the network may have another fire to put out...

Stelter's first mistake, of course, was having Weiss on his show.

His second mistake was assuming she didn't have receipts when she said the world has gone mad.

"Where can I start? Well, when you have the chief reporter on the beat of COVID for The New York Times talking about how questioning or pursuing the question of the lab leak is racist, the world has gone mad.

When you're not able to say out loud and in public there are differences between men and women, the world has gone mad.

When we're not allowed to acknowledge that rioting is rioting and it is bad and that silence is not violence, but violence is violence, the world has gone mad," Weiss said.

"When you're not able to say the Hunter Biden laptop is a story worth pursuing, the world has gone mad.

When, in the name of progress, young school children, as young as kindergarten, are being separated in public schools because of their race, and that is called progress instead of segregation, the world has gone mad. There are dozens of examples."

Stelter's third and final mistake was asking Weiss "who" is to blame?

"People that work at networks like, frankly, like the one I'm speaking on right now, who try and claim that it was racist to investigate the lab leak theory," Weiss shot back, adding later that CNN and the MSM's actions were "disinformation by omission."

Watching Stelter's face alone is worth the price of admission.

CNN accidentally let someone tell the truth on air…

Are You Obedient? Take the Quiz to Find Out!

MINDSET: This One Factor Is the Difference Between Defeat and Opportunity