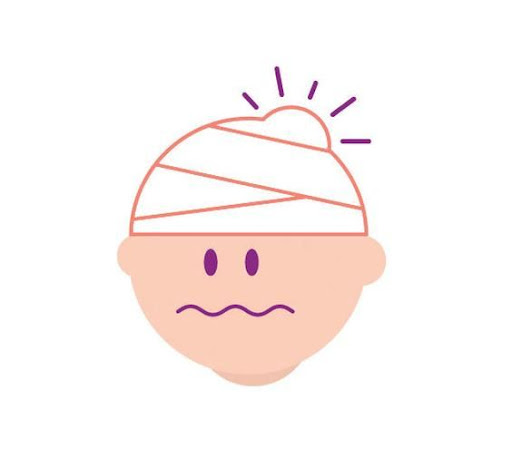 The difference between a 'safe' bump on the head one that requires urgent medical attention - and it all comes down to whether it feels like a boiled egg.

The team of Australian paediatric nurses who run CPR kids said if a lump is firm and not accompanied with sleepiness, vomiting or strange behaviour your toddler can get straight back to playing.

But if the lump feels soft, like an avocado ready to be turned into guacamole, you need to see a doctor as soon as possible.

The women said a 'bump to the head is a rite of passage' for toddlers and noted if kids cry straight after it is a good sign.

But they also highlighted indicators that the head injury might be serious and require medical attention.

'Once a bump appears, if it is squishy it can mean that there is a significant amount of bleeding and requires medical attention,' they wrote.

A firm bump is a good sign, as is a child's willingness to 'get back to what they were doing'.

But vomiting, sleepiness, abnormal behavior, seizures, or loss of consciousness are all red flags and indicate a bad bump to the head.

The nurses said a firm bump feels like a boiled egg.

When they say soft it could feel similar to a very ripe avocado, the explained.

'But remember if you are ever concerned or in doubt seek medical attention,' they said.

Will Pro Tennis Competition Require Health to Be Sacrificed?