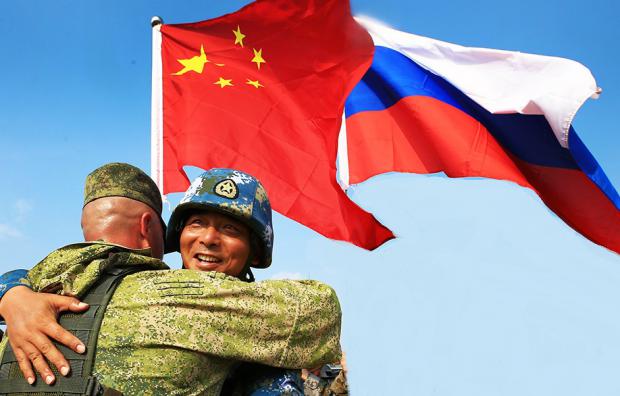 Vladimir Putin today showed off Russia's military strength to the world as massive 'invasion' war games were staged in the Black Sea near the Ukraine and dozens more Kremlin warships joined Chinese gunboats off Japan.

More than 40 Russian vessels and 30-plus military planes and 20 helicopters took part in exercises in Crimea, with missile launches, practice bombings and landings by amphibious forces.

Thousands of miles away, a Russian and Chinese fleet sailed through the narrow Tsugaru Strait between mainland Japan and its northern island Hokkaido, putting Tokyo on high alert.

The imperious display comes amid soaring tensions after it emerged this week that China had tested a new hypersonic nuclear-capable missile, taking world powers by surprise with a fearsome technology capable of striking virtually anywhere on the planet.

Counterbalancing the threat posed by China is the new Aukus alliance forged by the US, UK and Australia last month.

Warships from those countries were this week sailing through the Bay of Bengal, led by the Royal Navy's new flagship carrier, HMS Queen Elizabeth, on the fleet's way back from a deployment in the South China Sea.

Washington on Monday said it was 'watching closely' after it was reported that China launched a new hypersonic missile in August, which experts warned indicated that Beijing's arsenal was more advanced than previously thought.