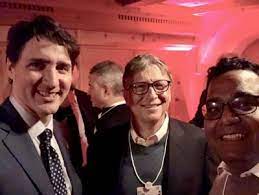 Canadian Prime Minister Justin Trudeau had called early elections for September 20, 2021, which is two months ahead of schedule. Prime Minister Trudeau's Liberal Party has won a close election race but has failed to win an absolute majority in the national parliament.

Trudeau announced better days ahead for Canada after his victory, and he declared new COVID-19 measures already on October 6, with numerous private companies informing their employees by e-mail on the same day that they would lose their jobs if they failed to get vaccinated by December 31 of this year. The staff would not be able to work online either, as the COVID-19 virus appears to be transmitted over the Internet as well as remotely.

*From October 30, 2021, all passengers over the age of 12 traveling by plane, train and boat must be fully vaccinated before boarding, regardless of whether they are heading to a domestic or international destination.*

"Thirty years ago, when we moved to Canada, we almost immediately realized that there was no such thing as democracy in the West. Liberals win in big cities and Conservatives gain votes in small and rural areas. For now, more people live in cities, especially since Trudeau has welcomed numerous refugees who voted in gratitude to him and the Liberals," claim emigrants from Bosnia and Herzegovina, who have lived here for decades.