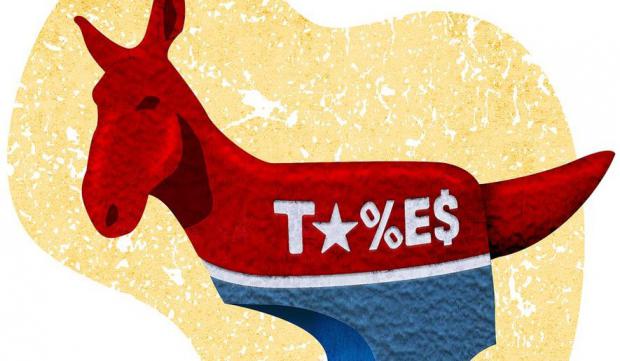 Senate Democrats are starting to freak out over Sen. Kyrsten Sinema's opposition to tax increases - a crucial component of their attempt to pass over $4.5 trillion between two spending packages.

Sinema is one of two moderate Democrats - the other being Sen. Joe Manchin (WV) holding up their party's spending agenda over their refusal to support the massive spending legislation.

According to the Wall Street Journal, Sinema has told lobbyists that she won't stand for significant increases in taxes on businesses, high-income individuals, or capital gains - pushing Democrats to 'more seriously plan for a bill that doesn't include those major revenue increases."

While the Journal reports that Sinema is opposed to a wide swath of tax increases as described above, CNBC's Kayla Tausche reports that the Arizona moderate has told 'outside groups' that her topline figures are 24% corporate taxes, no increase to the carried interest tax, and a ceiling of 39.6% as the top individual tax bracket.

It's unclear exactly where Sinema stands, however Dow Jones reported a short while ago that congressional Democrats are now considering leaving top tax rates unchanged. That said, going after tax cheats with a beefed-up IRS, and tightening the net on US companies' ability to earn money abroad, are still on the table.

Democrats had been hoping to pay for the entirety of their social policy and climate bill, now expected to cost around $2 trillion over a decade, with revenue from tax increases and government savings. In the House, Democrats have proposed raising the corporate tax rate to 26.5% from 21%, moving the top individual rate to 39.6% from 37% and increasing the top capital-gains rate to 28.8% from 23.8%. Their plan would also add a 3% surtax on income above $5 million. -WSJ

"I know some folks want to take away rate increases, it makes getting there using more interesting ideas—I want to get there but I've got a long way to go," said Sen. Mark Warner (D-VA), a member of the Senate Finance Committee.