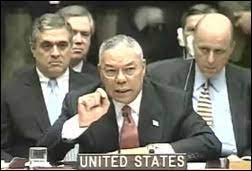 Attempting to bolster President George W. Bush's and the Pentagon's plan to invade Iraq and effect regime change there, Powell went before the United Nations and presented detailed evidence that Iraq was preparing to attack the United States with weapons of mass destruction.

The goal was to frighten the American people with images of nuclear bombs setting off mushroom clouds over American cities, along with biological and chemical weapons being unleashed all across America.

The plan worked. Given the overwhelming fear and anger arising from the 9/11 attacks, most Americans enthusiastically supported the invasion of Iraq in 2002, an invasion that ultimately killed countless Iraqis and ended up destroying the country.

The problem, of course, is that it was all a lie — a ruse designed to gain the support of the American people for a military regime change in Iraq. After no WMDs were found in Iraq, Bush and the Pentagon didn't apologize for their "mistake" and bring U.S. forces home. Instead, they kept them in Iraq for years, where they continued to kill people and destroy the country.