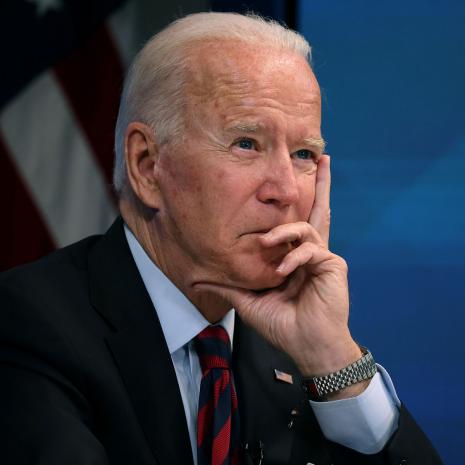 A new Gallup poll was released Friday, polling Americans between Oct. 1-19 shows Biden's approval rating plunged from 56% in Q1 to 44.7% in Q3, a whopping 11.3 percentage points that any president hasn't seen in over 75 years.

"Biden began his term with relatively solid approval ratings, ranging between 54% and 57% from January through June. His approval dropped to 50% in July and 49% in August as coronavirus infections surged in the U.S. The chaotic U.S. withdrawal from Afghanistan in late August, which included the deaths of more than a dozen U.S. military personnel in a terrorist attack at the Kabul airport, was likely the reason Biden's September job approval rating fell further to 43%," Gallup said.

We noted in June that Gallup data showed Biden's "honeymoon period" was over and said if the president cannot "tame inflation" could result in further rating declines. And, oh boy, were we right...

His ratings suggest no improvement in Democrat support, declining support among Independents, and only 4% of Republicans polled approve of the job he's done - that figure is likely to go to zero if things don't turn around for the president.

The 88% partisan gap in job approval is extraordinarily high considering Biden campaigned on "unity." During his inauguration, he said:

"We can join forces, stop the shouting and lower the temperature. For without unity there is no peace, only bitterness and fury. No progress, only exhausting outrage. No nation, only a state of chaos. This is our historic moment of crisis and challenge, and unity is the path forward."