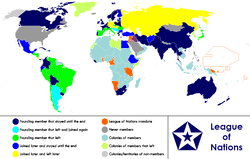 "If we remove the veto right of the permanent members, the UN would die the very same day – it would turn into the League of Nations. It would simply become a discussion platform".

As walls separating east and west along Manichean Cold War lines of "democratic/free" vs "authoritarian/enslaved" are quickly being erected before our eyes, it is worth pondering not only the deeper implication of the Russian president's message but also those healthier pathways out of the coming storm before it is too late.

League of Nations and the Imperial Hoax of WWI

Created in 1919 by forces centered in London and the racist Anglo-American establishment of the USA, the League of Nations was sold to a beaten-down world as the last and greatest hope for peace.

The groups then centered around Round Table leader Lord Alfred Milner (1), had taken control of the British Government in a form of soft coup in 1916 in order to shape the terms of the post-war order.

It was a major gamble of course since there were no guarantees that those imperial plotters who kicked over the world chessboard in 1914 would necessarily come out victorious.

Will the Biden Regime's War of Words on Russia Turn Hot Ahead?

Lavrov/Blinken Talks in Geneva: A Waste of Time and Effort for Russia