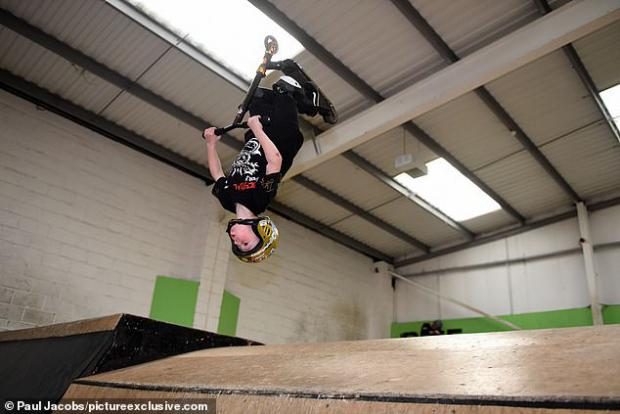 This is the moment a 10-year-old boy from Berkshire landed a double back flip on a scooter.

Tyler Hainey, was already the youngest person to land a single backflip on a scooter - a feat he mastered at the age of seven.

And now he has managed to rotate 720 degrees before landing safely on his wheels.

Footage shared on his social media yesterday shows his pulling off the amazing feat at Asylum Skatepark near Macclesfield - and his astonished reaction immediately afterwards.

The boy looks close to tears as he takes in what he has achieved, exclaiming: 'How did I do that?'

The video was uploaded on Monday, and has received more than 9,000 likes on Tyler's Instagram.

Tyler wrote: 'This has been haunting me since landing on my head! Today I smashed the wall of fear down and smashed it to pieces!!!

'You can tell how much this meant to me at the end.'

The youngster and his father Brian travel across the UK to skate parks so Tyler can improve his extraordinary skills.

Tyler has been riding scooters for almost five years and has won several prestigious competitions.

The young prodigy from Bracknell has earned the nickname Little Wolf from the scooter community and spends all his time after school honing his skills.

Confident Tyler has refused to be stopped by a few knocks and hopes to win gold if one day scooter riding enters the Olympics.