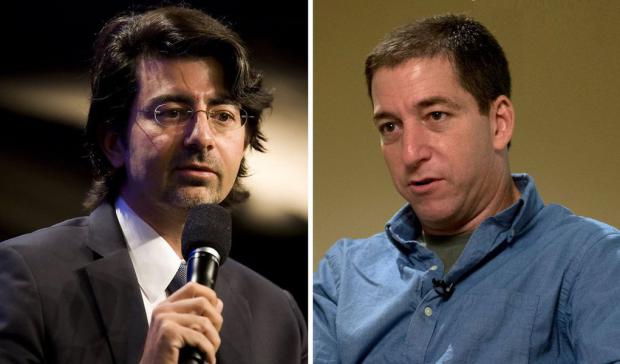 It is completely unsurprising to learn, as Politico reported last Wednesday, that the major financial supporter of Facebook "whistleblower" Frances Haugen's sprawling P.R. and legal network coordinating her public campaign is the billionaire founder of EBay, Pierre Omidyar. The Haugen Show continues today as a consortium of carefully cultivated news outlets (including those who have been most devoted to agitating for online censorship: the New York Times' "tech" unit and NBC News's "disinformation" team) began publishing the trove of archives she took from Facebook under the self-important title "The Facebook Papers," while the star herself has traveled to London to testify today to British lawmakers considering a bill to criminally punish tech companies that allow "foul content" or "extremism" — whatever that means — to be published.

On Sunday, Haugen told The New York Times that her own personal Bitcoin wealth means she is relying on "help from nonprofit groups backed by Mr. Omidyar only for travel and similar expenses." But the paper also confirmed that the firm masterminding Haugen's public campaign roll-out and complex media strategy, a group "founded by the former Barack Obama aide Bill Burton," is "being paid by donors, including the nonprofit groups backed by Mr. Omidyar." He is also a major donor to a shady new group calling itself "Whistleblower Aid" — bizarrely led by anti-Trump lawyer and social media #Resistance star Mark Zaid, who has been one of the most vocal critics of actual whistleblowers Edward Snowden and Julian Assange, both of whose imprisonment he has long demanded — that is now featuring Haugen as its star client.

Omidyar's net worth is currently estimated to be $22 billion, making him the planet's 26th richest human being. Like so many billionaires who pledge to give away large parts of their wealth to charity, and who in fact do so, Omidyar's net worth somehow rapidly grows every year: in 2013, just eight years ago, it was "only" $8 billion: it has almost tripled since then.

Omidyar's central role in this latest scheme to impose greater control over social media is unsurprising because he and his multi-national foundation, the Omidyar Network, fund many if not most of the campaigns and organizations designed to police and control political speech on the internet under the benevolent-sounding banner of combating "disinformation" and "extremism." Though one could have easily guessed that it was Omidyar fueling Frances Haugen and her team of Democratic Party operatives acting as lawyers and P.R. agents — I would have been shocked if he had no role — it is still nonetheless highly revealing of what these campaigns and groups are, how they function, what their real goals are, and the serious dangers they pose.

Any time I speak or write about Omidyar, the proverbial elephant in the room is my own extensive involvement with him: specifically, the fact that the journalistic outlet I co-founded in 2013, and at which I worked for eight years, was funded almost entirely by him. For purposes of basic journalistic disclosure, but also to explain how my interaction with him informs my perspective on these issues, I will describe that experience and what I learned from it.

When I left the Guardian in 2013 at the height of the Snowden/NSA reporting to co-found a new media outlet along with two other journalists, it was Omidyar who funded the project, which ultimately became The Intercept, along with its parent corporation, First Look Media. Our unconditional demand when deciding to accept funding from Omidyar was that he vow never to have any role whatsoever or attempt to interfere in any way in the editorial content of our reporting, no matter how much he disagreed with it or how distasteful he found it. He not only agreed to this condition but emphasized that he, too, believed the integrity of the new journalism project depended upon our enjoying full editorial freedom and independence from his influence.

In the eight years I spent at The Intercept, Omidyar completely kept his word. There was never a single occasion, at least to my knowledge, when he attempted to interfere in or override our journalistic independence. For the first couple of years, adhering to that promise was easy: he was an ardent supporter of the Snowden reporting which consumed most of our time and energy back then and, specifically, viewed a defense of our press freedoms (which were under systemic attack from multiple governments) as a genuine social good. So our journalism and Omidyar's worldview were fully aligned for the first couple of years of The Intercept's existence.

The arrival of Donald Trump on the political scene in 2015 changed all of that, and did so quite dramatically. As Trump ascended to the presidency, Omidyar became monomaniacally obsessed with opposing Trump. Although Omidyar stopped tweeting in March, 2019 and has since locked his Twitter account, he spent 2015-2019 as a very active user of the platform. The content he was posting on Twitter on a daily basis was utterly indistinguishable from the standard daily hysterical MSNBC panels or New York Times op-eds, proclaiming Trump a fascist, white nationalist, and existential threat to democracy, and depicting him as a singular evil, the root of America's political pathology. In other words, the Trump-centric worldview that I spent most of my time attacking and mocking on every platform I had — in speeches, interviews, podcasts, social media and in countless articles at The Intercept — was the exact political worldview to which Omidyar had completely devoted himself and was passionately and vocally advocating.

The radical divergence between my worldview and Omidyar's did not end there. Like most who viewed Trump as the primary cause of America's evils rather than just a symptom of them, Omidyar also became a fanatical Russiagater. A large portion of his Twitter feed was devoted to the multi-pronged conspiracy theory that Trump was in bed with and controlled by the Kremlin and that its president, Vladimir Putin, through his control over Trump and "interference" in U.S. democracy, represented some sort of grave threat to all things good and decent in American political life. All of that happened at exactly the same time that I became one of the media's most vocal and passionate critics of Russiagate mania, frequently criticizing and deriding exactly the views that Omidyar was most passionately expressing on Twitter, often within hours of his posting them.

My dissent on Russiagate became so vocal, just as Omidyar was devoting himself to it with greater and greater zeal, that liberal outlets began publishing lengthy and highly critical profiles of me that had little purpose but to expel me from Decent Liberal Society due to my Russiagate heresy and to cast that dissent as the byproduct of mental instability rather than genuine conviction. This extreme divergence between my public profile and Omidyar's core views expanded for years. Often Omidyar would promote and herald a view on Twitter in the morning, and I would then publish an article on The Intercept attacking that same view in the afternoon, and then go on television that night to attack it some more.

Perhaps most extraordinary was that Omidyar became convinced that salvation from the evils of Trump and Russia was to be found primarily in propping up the faction of #NeverTrump Republicans — led by people like neocon Bill Kristol, career CIA operative Evan McMullin, and the consummate scumbags of the Lincoln Project — whom he regarded as uniquely patriotic and noble for putting country over party (even though their influence was confined to cable news green rooms and major newspaper op-ed pages). Omidyar began funding many of the #NeverTrump groups overseen by Kristol — who I often denounced and still regard as one of the most toxic and deceitful figures in American political life — as well as groups whose sole purpose was to hype the Russian threat and who claimed they were united in patriotic bipartisan unity to combat Russia-and-Trump-fueled disinformation on the internet. To underscore how deeply ensconced Omidyar became in the very political faction for which I harbored the greatest scorn and expressed the most unbridled contempt, his very last tweet since he stopped using Twitter in 2019 was an approving retweet of the Lincoln Project's Rick Wilson, claiming for the ten thousandth time that conclusive proof had emerged of Trump's criminality.

That Omidyar's political activism and my journalism did not just diverge, but became polar opposites, was so glaring that it began attracting the attention of journalists who contacted us to tell us they intended to write stories on this strange situation. It was indeed extreme: there were times when I was publishing investigative articles or scathing denunciations of the very groups Omidyar was funding and promoting, putting him in the situation in which the U.S. government often finds itself: essentially funding both sides of the same war. It was an irresistible story to journalists: at the time, I was the most prominent and the highest-paid journalist associated with The Intercept, which relied almost entirely on Omidyar's annual multi-million dollar largesse, and yet my primary political and journalistic focus at The Intercept was tantamount to a war on Omidyar's most cherished political beliefs and core objectives.