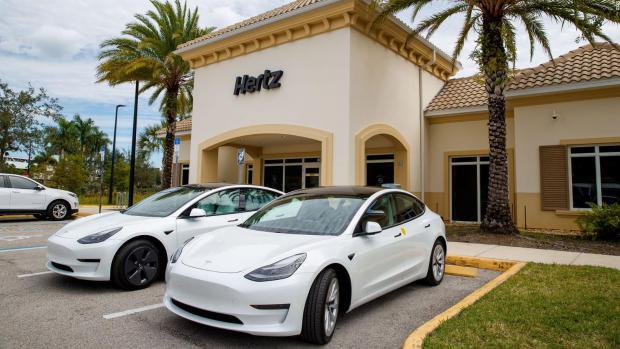 In what is now starting to look like one giant cross-marketing scheme, the once-defunct and now back-on-the-public-markets car rental company Hertz has - two days after announcing an order of 100,000 Tesla vehicles - announced it has also inked deals with Carvana and Uber.

It's as though Hertz is seeking out the market's least consistently profitable entities to anchor itself to, so as to expedite the company's next trip to bankruptcy.

Actually, what it looks like is throwing around a bunch of "hip" brands to try and reinvigorate the brand. Hertz even featured Tom Brady in a recent commercial touting its new EV stock.

The rental company's new agreement with Uber, drivers "who previously had to provide and maintain their own EVs will, starting Nov. 1, be able to rent a Tesla from Hertz instead," Bloomberg wrote Wednesday morning.

While some may question what, exactly, the point of this is, Hertz calls it "an alternative to buying or leasing" that will be "cheaper than either".

So now Uber drivers can get one step closer to the new world order's ultimate goal of "owning nothing and loving it" by renting their car every day before they go out and take to the roads. We're sure that won't be a hassle.

Uber drivers will pay a "preferred weekly rate for unlimited miles in the Hertz EVs, plus expenses for recharging and incidental damage," the report says.

Dara Khosrowshahi, chief executive officer of San Francisco-based Uber commented: "Now is the time to drive a green recovery from the pandemic."