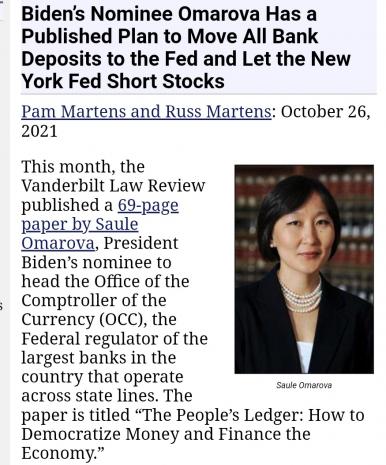 This month, the Vanderbilt Law Review published a 69-page paper by Saule Omarova, President Biden's nominee to head the Office of the Comptroller of the Currency (OCC), the Federal regulator of the largest banks in the country that operate across state lines. The paper is titled "The People's Ledger: How to Democratize Money and Finance the Economy."

The paper, in all seriousness, proposes the following:

(2) Allowing the Fed, in "extreme and rare circumstances, when the Fed is unable to control inflation by raising interest rates," to confiscate deposits from these FedAccounts in order to tighten monetary policy;

(3) Allowing the most Wall Street-conflicted regional Fed bank in the country, the New York Fed, when there are "rises in market value at rates suggestive of a bubble trend," such as with technology stocks today, to "short these securities, thereby putting downward pressure on their prices";

(5) Consolidate all bank regulatory functions at the OCC – which Omarova has been nominated to head.