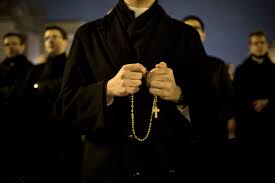 The world's Catholic exorcists were unable to carry out their work in person, creating what was essentially a devil's playground for those who believe.

And so the 15th annual exorcism conference, held in Rome this week after a one-year hiatus due to COVID, has turned up all sorts of new pandemic problems facing the world's exorcists. Those in attendance at the five-day conference, hosted in a Vatican-owned pontifical university, shared stories about the increase in calls they'd received over the last year.

"Overwhelmingly we were asked to exorcise COVID from people who were sick," Father Miguel Martin, a Spanish exorcist who is attending the conference, told The Daily Beast. "We were told under no circumstance should we perform the rite on a COVID patient."

Vatican Assembles Avengers of Religion to Beat the Devil

This year the conference, which is officially called the Course on Exorcism and Prayer of Liberation, is especially focused on angels and demons in Sacred Scripture and the Magisterium, as well as seminars on the Asian world in the context of Afro-Brazilian magic rites, which are not in line with Catholic teaching.