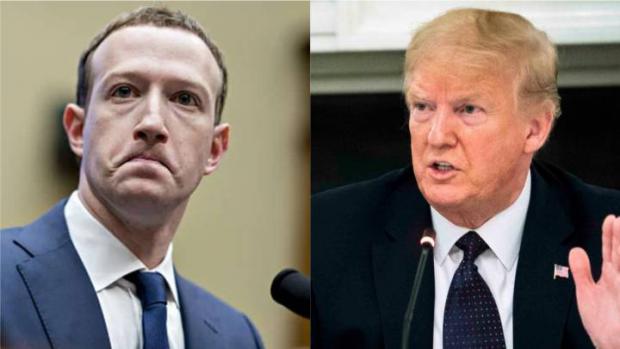 Donald Trump accused Facebook founder and CEO Mark Zuckerberg of being a 'criminal' in a scathing statement lashing out against his $400 million donation toward local election offices in the November 2020 race.

Republicans have accused Zuckerberg of trying to buy the election after it was found that many counties that got the funds went to Joe Biden in the 2020 election.

The former president was fuming over charges levied against Nebraska Republican Rep. Jeff Fortenberry over illegal campaign contributions, which he called a double standard with how others - the tech billionaire, for example - are treated.

'Mark Zuckerberg, in my opinion a criminal, is allowed to spend $500 million and therefore able to change the course of a Presidential Election,' Trump said.

Zuckerberg, 37, and his wife Priscilla Chan, 36, donated $419.5 million to The Center for Technology and Civic Life (CTCL) and The Center for Election Innovation and Research (CEIR), which was reportedly given with specific conditions.

CTCL, a nonpartisan foundation that had liberal roots, distributed the majority of the funds - $350 million.

Some of its founders, including Epps-Johnson, once were at the New Organizing Institute, which provided data and training to liberal activists.

One analysis shows Biden-winning counties were three times more likely to get funding from the organizations than Trump ones.

Republican anger over the donation spurred at least eight GOP-controlled states to pass bans on donations to election offices this year as they try to block outside funding of voting operations.

Using the donations, both CTCL and CEIR sent funds to local governments to implement administrative practices, voting methods, data-sharing agreements, and outreach programs for the 2020 elections, according to the report published in the Federalist on Tuesday.