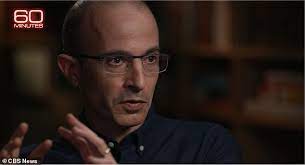 The future could see the world's human data, delivered through the rising power and reach of artificial intelligence, in the hands of a powerful few - a recipe for a dystopian tomorrow populated by "hacked humans," says Yuval Noah Harari. The world-renowned author tells Anderson Cooper nations must begin cooperating to prevent this by regulating artificial intelligence and the collection of data across all nations.   The interview with Harari will be broadcast on 60 Minutes, Sunday October 31, at 7 p.m. ET/PT on CBS.

Harari says the countries and companies that control the most data will control the world.

"The world is increasingly kind of cut up into spheres of data collection, of data harvesting. In the Cold War, you had the Iron Curtain. Now we have the Silicon Curtain, that the world is increasingly divided between the USA and China," Harari tells Cooper. "Does your data go to California or does it go to Shenzhen and to Shanghai and to Beijing?"

Harari, a history professor at Hebrew University in Jerusalem, published his first book, "Sapiens," in 2014; it was a global best seller. He has since published two more books with futuristic themes, "Homo Deus" and "21 Lessons for the 21st Century." The three books together have sold 35 million copies in 65 languages.

The Other "Big Lie": Democrats Fuel Doubts Over The Legitimacy Of The Coming Elections