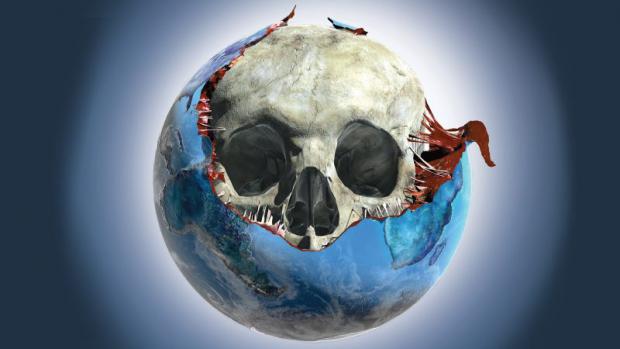 The word 'dinosaur' comes from two Greek words and means terrible lizard. In Greek, deinos means "terrible" and sauros is the word for "lizard".

The Greek and Latin combination Tyrannosaurus rex means "king of the tyrant lizards."

Then, one day, these terrible lizards vanished like dinosaurs in the mist, only to return 65 million years later in the form of Rockefeller / Rothschild ape-cestors who evolved into power-hungry billionaire banksters along with their 2021 puppet cohorts – otherwise known as sick f*cks who use kids for experimentation and should rot in the pits of Tartarus for the rest of their lives.

They're totally making monkeys out of people. (Actually, I think Matt Groening made a Simpsons episode about it – while taking a break from getting a "foot massage" from an underage girl on Jeffrey Epstein's plane)

There are numerous theories for this great extinction, but I'm only discussing a few of them in today's walk n' talk:

Hyperinflation
Mass vaccination by even bigger, more terrible lizards and the zombies who support it
Young dinos terrorized by a Sniffasaurus and his hunter/gatherer friends
Declaring parents as domestic terrorists for daring to complain to school boards about critical race theory and covaids restrictions.
Think I'm talking dino-poop? Stay tuned for my giraffe story!
It's the apocalypse… and who do you think will survive the collapse of civilization? More in today's video…

Capitulation Bloodbath: Stocks Crash After Most Negative Opening TICK Of 2022...