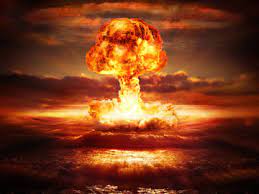 The Financial Times lead story this weekend was that US allies are lobbying the White House NOT to shift to a "No First Use" (NFU) nuclear policy. After Afghanistan, this is another enormous shock for an ostensibly "America is Back" administration. Military strategists back to Vegetius ("Si Vis Pacem, Para Bellum") stress America's nuke stockpile underpins its military might; and Korea, Southeast Asia, the Middle East, and Central Asia aside, that is still what prevents more wars more often everywhere else. If the US moves to NFU, any other power can do whatever it wants short of nukes, and the US can only respond with already-overstretched conventional power. Consider that as Russia again builds up forces near Ukraine; when looking at tensions in the South China Sea; and when China's Global Times runs an editorial, "US should announce 'no first use of nuclear weapons,' with no strings attached". There are always strings attached to shifts in such existential policies: markets would be well advised to understand the implied volatility.

Meanwhile, Poland will double the size of its army to 300,000, making it the largest in the EU. That's a key signal about what a country with a keen historical grasp of the existential dangers of geopolitics feels is now necessary.

Word is that French President Macron wants to send a signal that there are consequences for the UK leaving the EU, and the current fishing row could soon involve a go-slow to throttle UK supply chains further. The Sunday Times reports the UK is considering a massive infrastructure spend in response, to shift trade away from Calais-Dover to other EU-UK routes. (And Macron is also openly calling Aussie PM Morrison a liar re: AUKUS.)