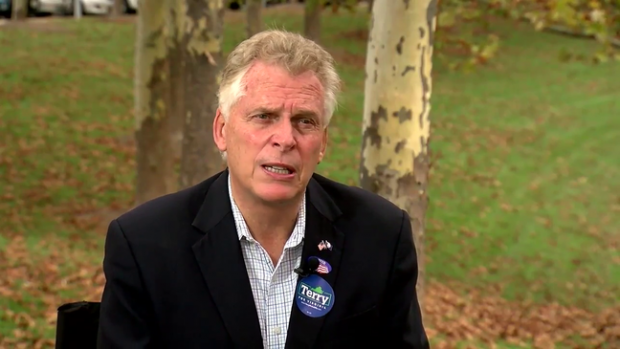 Virginia Democratic gubernatorial candidate Terry McAuliffe praised his state's education system on Sunday, noting that he has raised five children there even though four of them went to private high schools.

Education has been a major focus of the race between McAuliffe and Republican Glenn Youngkin, as they have been at odds over parental involvement in curriculum development.

"We have a great school system in Virginia. Dorothy and I have raised our five children," McAuliffe said on NBC's "Meet the Press," during an interview in which he slammed Youngkin's positions on education.

While this may be true, four out of McAuliffe's five children went to private high schools.

According to a Washington Post profile from 2013, when after McAuliffe won a previous election to become governor, one of McAuliffe's sons attended Gonzaga College High School, a Catholic institution in Washington, D.C., that has a current annual tuition of $24,950, not including meals or transportation.

That price tag is a bargain compared to The Potomac School in McLean, Va., where three of McAuliffe's other went to high school. According to their website, Potomac's tuition for the 2021-22 school year is $45,650 per year from grades 9-12.

Fox News reached out to McAuliffe's campaign for comment but they did not immediately respond.

One major area of debate between McAuliffe and Youngkin has been whether or not parents should have a right to influence what students learn at public schools. McAuliffe has been a staunch proponent of the idea that this should be left to experts and not parents.