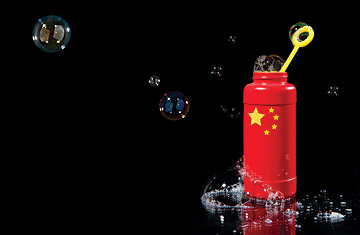 That China faces structural problems is well-recognized. The list of articles in the August issue of Foreign Affairs dedicated to China reflects this:

Xi's Gamble: the Race to Consolidate Power and Stave Off Disaster

The Robber Barons of Beijing: Can China Survive its Gilded Age?

Life of the Party: How Secure Is the CCP? (Chinese Communist Party)

What the conventional analysts do not fully grasp, in my view, are 1) the existential threat to the CCP and China's economy posed by its unprecedented, metastasizing credit-asset bubble and 2) its incipient energy crisis.

As I explained in a recent blog post, What's Really Going On in China?, the CCP and the government informally institutionalized moral hazard (the disconnection of risk and consequence) as a core economic policy.

Every financial loss, no matter how risky or debt-ridden, was covered by the state (via bail-out, refinancing debt, new loans, etc.) as a "cost of rapid development," a reflection of the view that some inefficiency and waste was inevitable in the rapid development of industry, housing, infrastructure and a consumer economy.