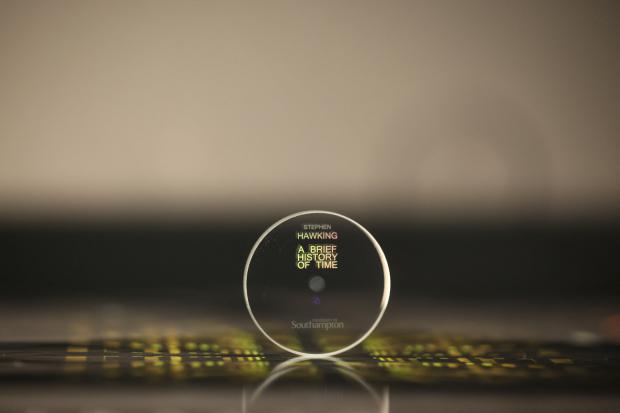 The technology is said to be capable of storing 500 terabytes on a single CD-sized disc, with the creators imagining it finding use in preserving everything from information for museums and libraries to data on a person's DNA.

The technology is what is known as five-dimensional (5)D optical storage and it is one the University of Southampton team has been pursuing for a while. It was first demonstrated back in 2013, with the scientists successfully using the format to record and retrieve a 300-kb text file, though they harbored much loftier ambitions than that.

The data is written using a femtosecond laser, which emits incredibly short but powerful pulses of light, forging tiny structures in glass that are measured on the nanoscale. These structures contain information on the intensity and polarization of the laser beam, in addition to their three spatial dimensions, which is why the scientists refer to it as 5D data storage.

In 2015, the team demonstrated their progress by using the technology to save digital copies of major documents such as the Universal Declaration of Human Rights, the King James Bible and the Magna Carta. As opposed to typical hard-drive memory that is vulnerable to high temperatures, moisture, magnetic fields and mechanical failure, this "eternal" 5D data storage promised incredible thermal stability and a virtually unlimited lifetime at room temperature.

One thing the scientists have been working to address, however, is the ability to write data at fast enough speeds and at high enough densities for real-world applications. They now claim to have achieved this by using an optical phenomenon called near-field enhancement, which enables them to create the nanostructures with a few weak light pulses rather than writing with the femtosecond laser directly. This allows data to be written at 1,000,000 voxels per second, which equates to 230 kb of data, or more than 100 pages of text, per second.