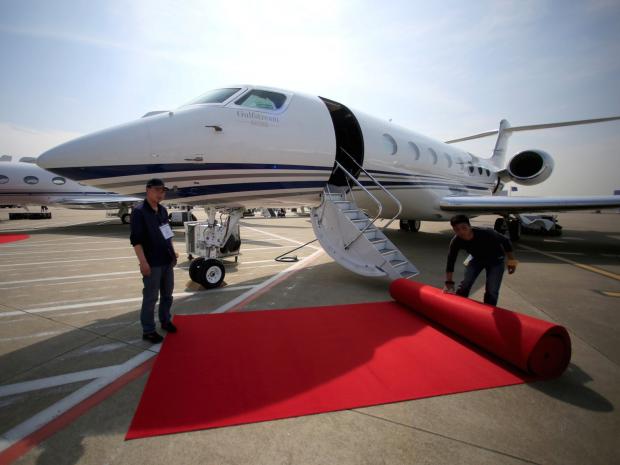 Billionaire Jeff Bezos and his girlfriend Lauren Sanchez met with Britain's Prince Charles last night on the eve of the Cop26 climate summit in Glasgow, after jetting into Scotland on a $65 million private jet.

The meeting came two days after the Amazon founder was in Turkey celebrating the 66th birthday of fellow-billionaire Bill Gates as the pair vacationed on superyachts.

And despite touting the importance on taking climate action, Bezos arrived in Scotland on Sunday at Prestwick Airport in his $65million Gulfstream, leading a 400-strong parade of carbon-emitting private jets flying in for the summit during which the world's leaders will hold crunch-talks over the global climate crisis.

The trio were seen in a photograph shared on Bezos's social media pages enjoying a cup of tea at Dumfries House, a Scottish country mansion that is a roughly 40 minute journey by car to Glasgow.

In the photograph, Bezos and Sanchez are seen seated on priceless blue Chippendale armchairs surrounded by ornate portraits hanging in the Resplendent Blue Drawing room of the country home, that the Prince of Wales had renovated as part of the Prince's Trust before reopening it to the public in 2012.

Bezos is seen with a broad smile as the heir to the British crown gestures close to a cup of tea that is perched on top of a small table, while a casual looking Sanchez leans forward, listening intently.

'The Prince of Wales has been involved in fighting climate change and protecting our beautiful world for five decades — far longer than most,' Besoz gushed on Twitter and Instagram along with the photograph.

'We had a chance to discuss these important issues on the eve of #COP26 — looking for solutions to heal our world, and how the @BezosEarthFund can help.'

Earlier in the day, Prince Charles delivered a speech in Rome for the G20 summit - which saw the likes of US President Joe Biden, British Prime Minister Boris Johnson and French President Emmanuel Macron convene ahead of Cop26 - before also taking a private jet to Glasgow.