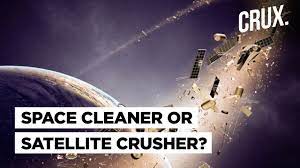 "[Communist China's satellite] is a real-world offensive capability that can hunt and destroy American systems and render the U.S. military on earth deaf, dumb, and blind." — Brandon Weichert, author of Winning Space: How America Remains a Superpower, to Gatestone.

At one time, America was dominant in space, and American political leaders decided to go slow on developing anti-satellite weapons for fear of triggering a competition.

All that American restraint did was to allow the Chinese and Russian militaries to grab commanding leads in the race to deploy these impossible-to-defend-against delivery systems for nuclear weapons.

Unfortunately, "the Department of Defense is still unbelievably bureaucratic and slow."

Fortunately, there is also Elon Musk, a bureaucracy of one.

On October 24, China launched its Shijian-21 into orbit. The satellite, according to China Aerospace Science and Technology Corp., is "tasked with demonstrating technologies to alleviate and neutralize space debris."